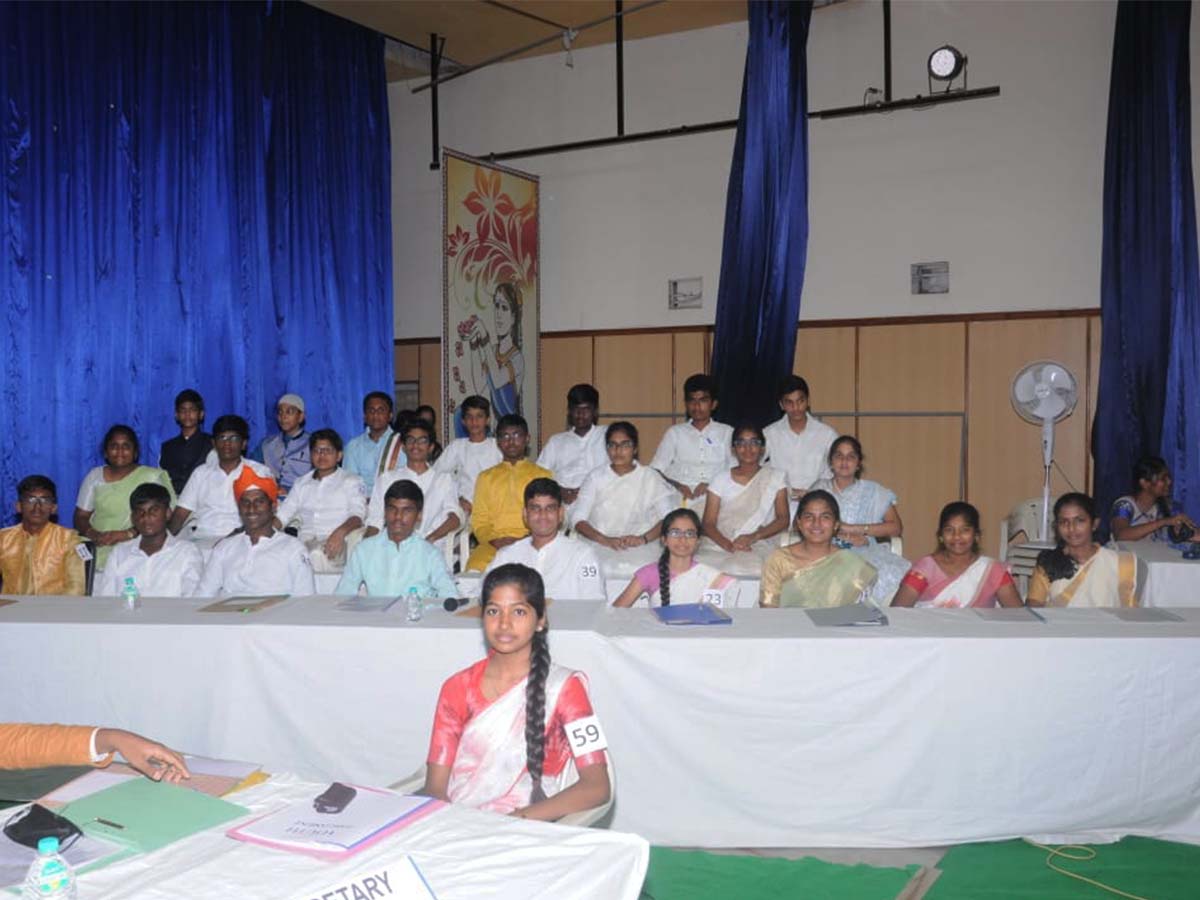 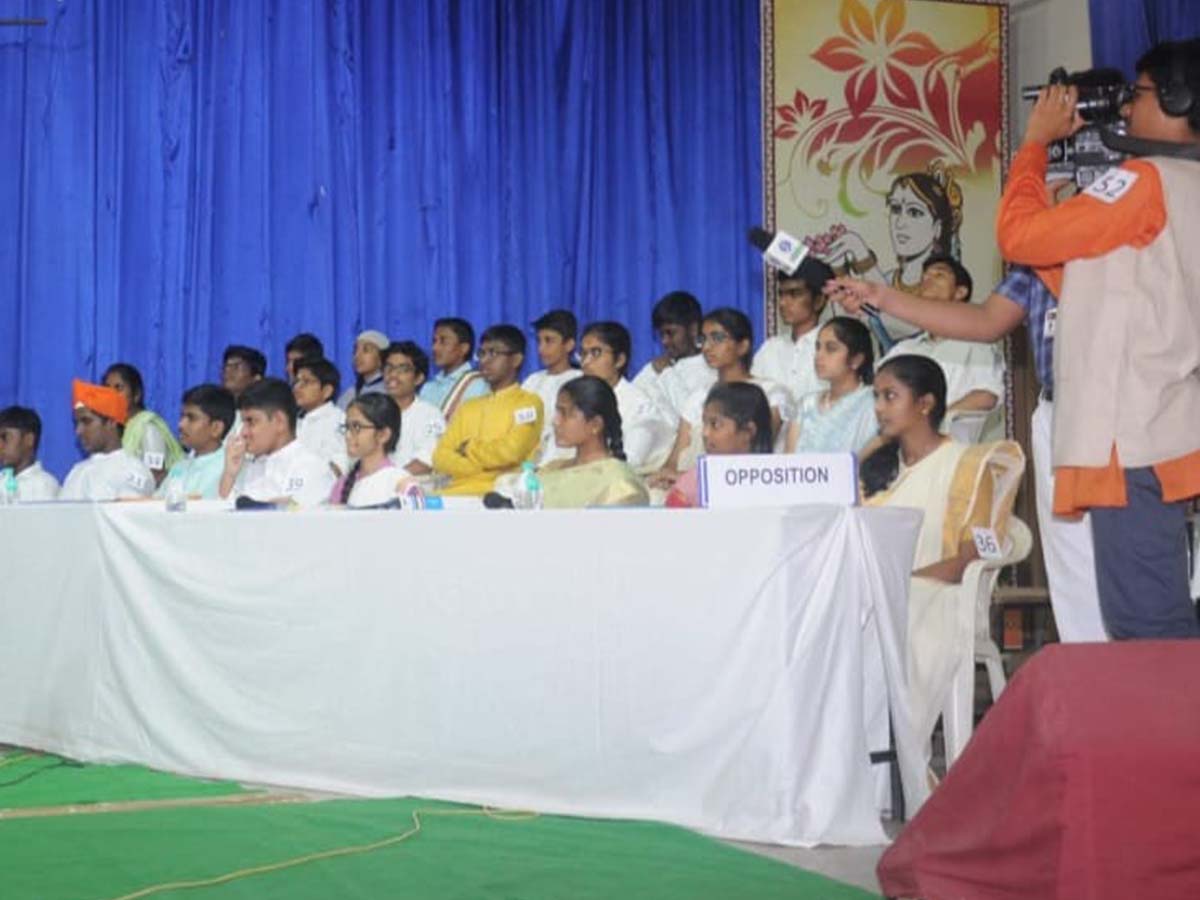 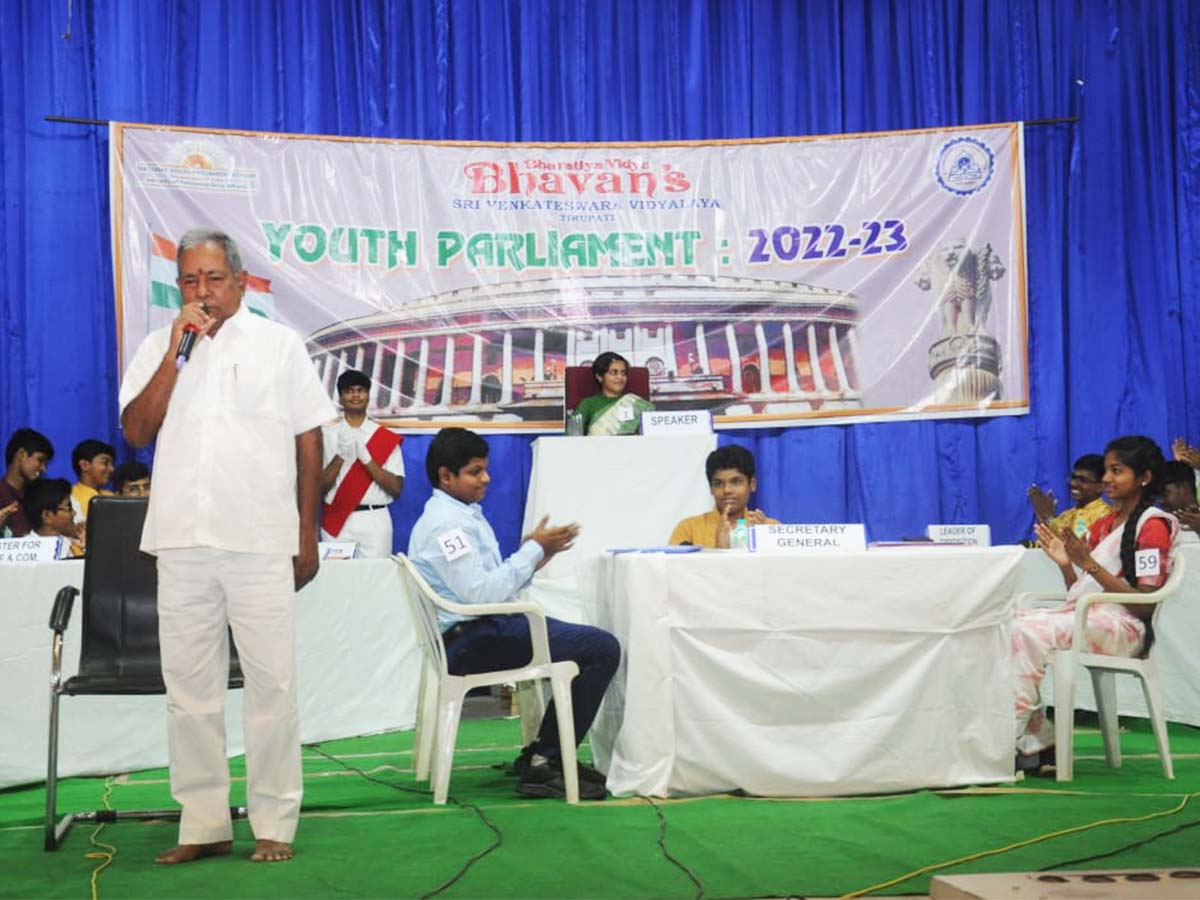 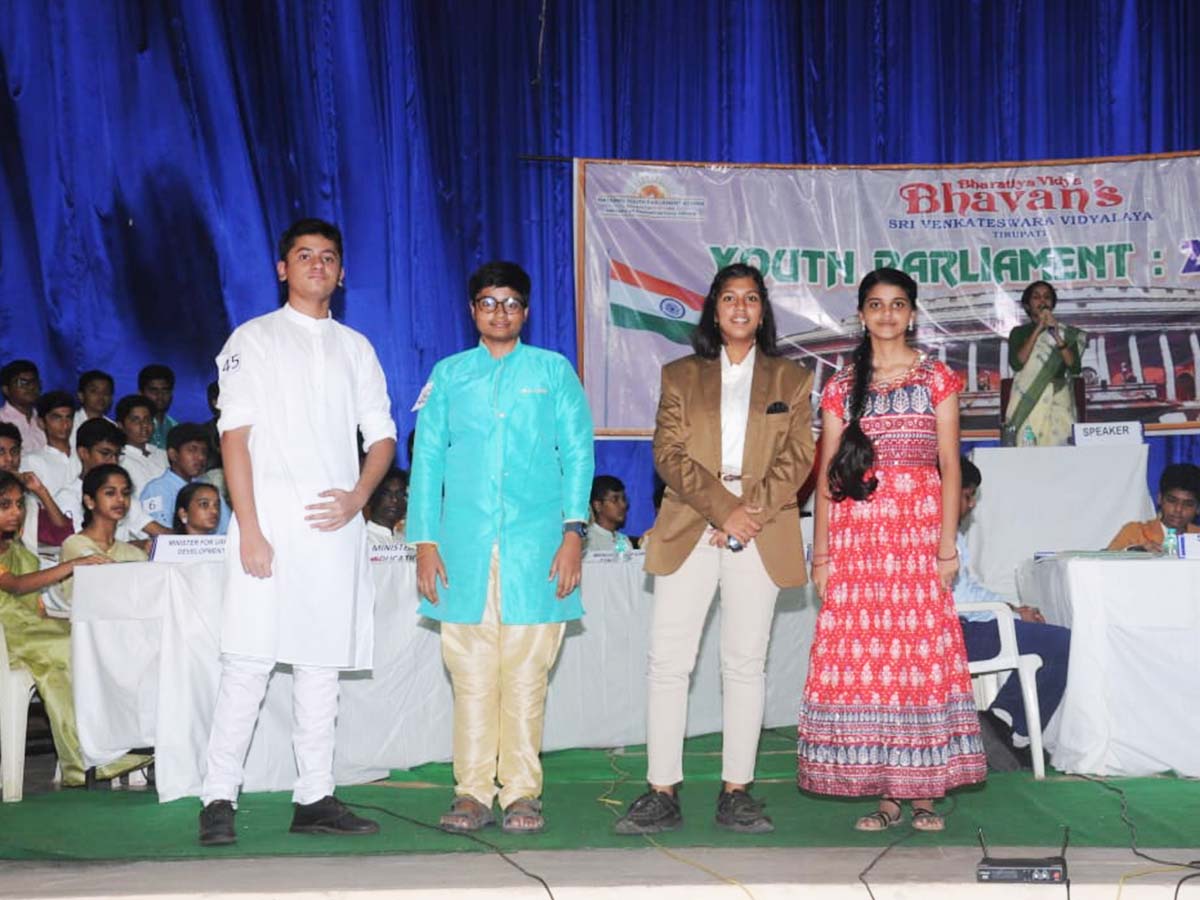 The Youth Parliament is an innovative programme to familiarize Youth with the Parliamentary proceedings and Democratic process. Youth Parliament was organized by the students of Bharatiya Vidya Bhavan’s, Sri Venkateswara Vidyalaya, Tirupati on 31.10.2022 in the school auditorium.

The day’s Chief Guest was Dr. V. Bhaskara Sai Krishna Yachendra, Former M.L.A., Venkatagiri & Chairman, S.V.B.C., T.T.D. Tirupati. Mrs. A. Vani Sree, Vice Principal introduced the Guest to the audience. Mrs. P.S.Sundari, Vice Principal, elaborated on the significance of the Youth Parliament. She said that the very purpose of the event is to make the students understand the doctrines of Democracy and the proceedings in the sessions of Parliament. She also highlighted the importance of the day i.e. National Unity Day, which is observed to mark the birth anniversary of Sri Sardar Vallabhai Patel, the Iron man of India. She further said that the school had registered under the second edition of the National Youth Parliament Scheme, Kishore Sabha which is a Nationwide competition among C.B.S.E. schools organized by the Ministry of Parliamentary affairs.

Dr.N.Satyanarayana Raju, Hon.Director & Treasurer, Bharatiya Vidya Bhavan, Tirupati, in his Presidential address expressed his pleasure for the gracious presence of Dr. V.Bhaskara Sai Krishna Yachendra garu, the great personality, as the day’s Chief Guest to witness the Youth Parliament. He praised the Chief Guest as the embodiment of knowledge, a renowned Musician, and a man who strived for Nations Progress. He further said that the students of Bhavan’s won many awards and rewards in Sports and many other competitions and emphasized that in the competitive award of Youth Parliament too, they would prove their caliber. He congratulated the teachers who contributed their part in the successful carrying out of the event.

Around 60 students took the various roles of Speaker, Prime Minister, Cabinet Minister, Opposition Party Members, and Foreign delegates. It was a power packed session full of heated deliberations, sharp witted comments, stringent disapproval, and booming uproars. The audience was enthralled to see the energy coming to life on stage.

Speaking on this occasion, the Chief Guest praised the performance of the students in exulted terms and the Mock Parliament to be an idealistic, Noble Parliament with all purity, innocence, and honesty flourishing in their minds. He also expressed his gratitude to the Director for giving him the opportunity to witness the event. He wished everyone to strive hard and work for the progress of our Nation.
The day’s Chief Guest was felicitated by the Director, Executive Committee Members.

The culmination of jubilance drew to its close with the proposal of a Vote of Thanks by Smt. N. Rekha, Head, Dept. of Social Science. The programme was witnessed by the Executive Committee Members, School Managing Committee Members, Parents, Teachers, and students. 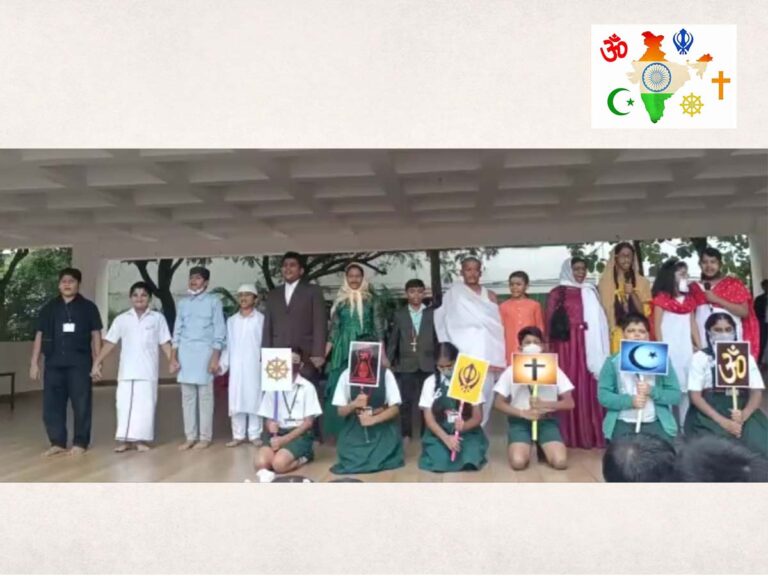 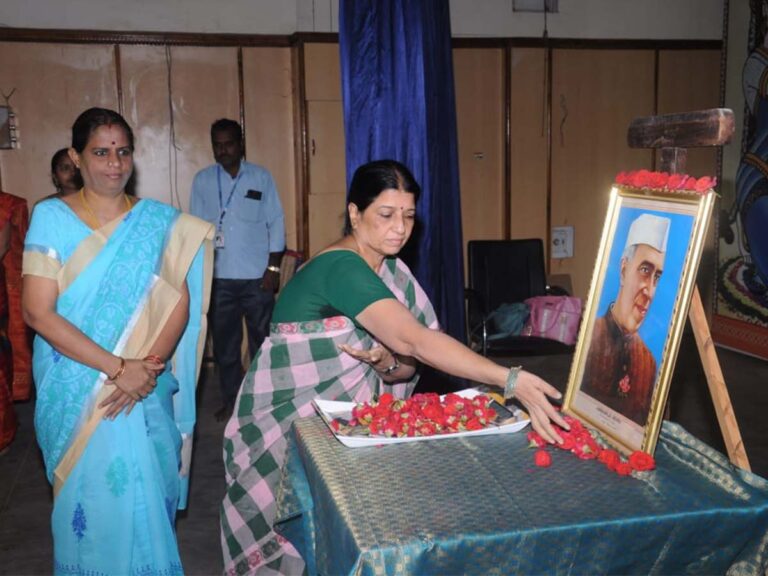 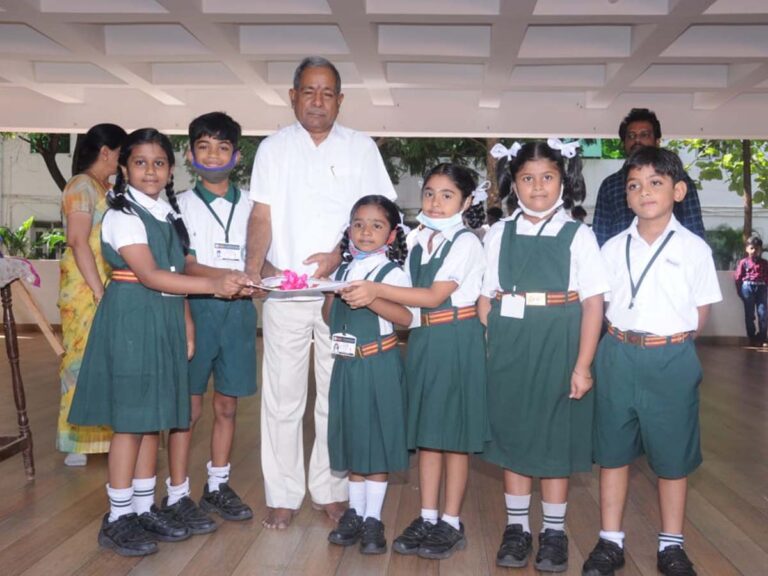 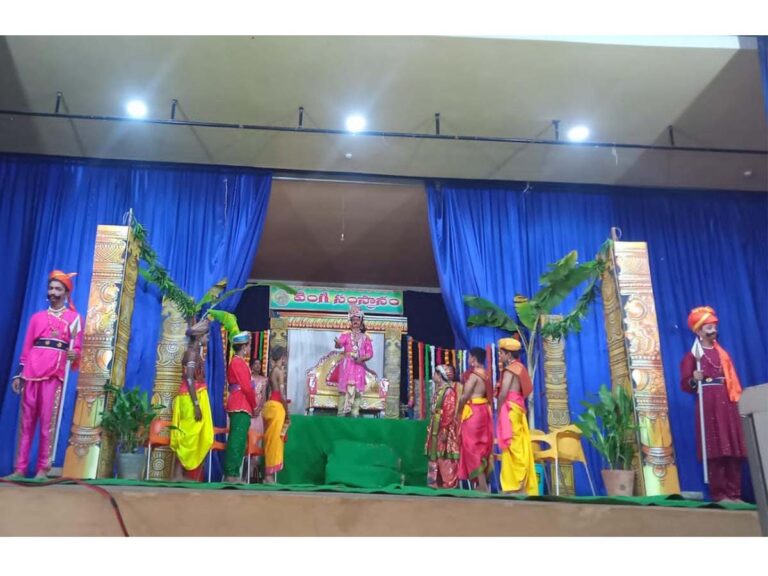 Millennium celebrations on the coronation of Sri Raja Raja Narendra 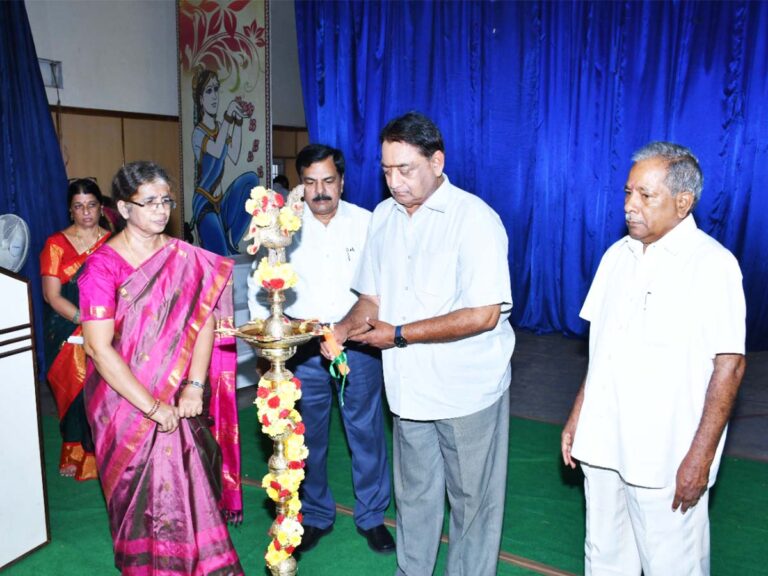